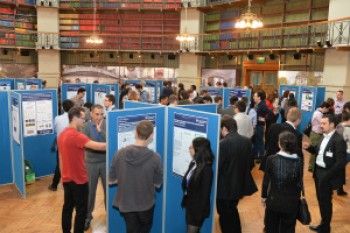 The biannual Industrial Liaison Forum was held on Thursday October 23rd in the Octagon. The event was a great success with over sixty industrialists from over forty organisations attending. The event was broken up into four parts, starting in the morning with the PhD research poster exhibition, followed by the annual SEMS Prize Day ceremony for the 2013-2014 academic year. The afternoon consisted of four separate panel sessions, chaired by SEMS academics and made up of attending industrial participants followed by a mini Careers Fair back in the Octagon.

The PhD poster exhibition was of great interest to faculty, students and attending industrialists alike. Over 60 posters were displayed with two prizes awarded, sponsored by ARTIS and the National Physical Laboratory.
The annual SEMS Prize Day ceremony then followed with over fifty student prizes and nearly £8000 in prize money awarded. There were a number of multiple award recipients and all of the winners were honoured to have their prizes delivered by a number of industrial sponsors and the SEMS Head of School, David Lee.

In the afternoon four parallel panel sessions were held, attended by over 400 SEMS students. The sessions were chaired by SEMS academics and made up of leading industrialists in the areas of Medical Materials and Engineering, Innovative Technologies, Transportation and Alternatives to Traditional Engineering.
Finally the day was brought to a resoundingly successful completion with a Mini Careers fair in the Octagon that attracted over 40 companies and 500 students. This was the first time we included this element as part of the Forum and there was tremendously positive feedback from both students and our industrial contacts.

The SEMS Industrial Liaison Forum has now been held twice a year for seven years and provides an opportunity for students, academics and industrial links to interact and further Queen Mary’s strong position and reputation within the engineering and materials science industries.

The next Industrial Liaison Forum will again be held in the Octagon on March 4, 2015 and will be focused on current MEng projects and industrial links with SEMS alumni.