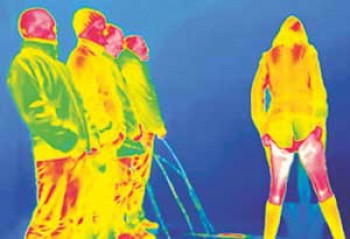 Last year Prof Martin Knight was filmed as part of a documentary on urine which was entitled 'The Superpowers of Urine'.

Martin's appearance followed a publication on the analysis of the spiral pattern made by urine as it leaves the elliptical shaped male urethra (PLOSone 2012). The documentary will be aired on French TV in May 2014.