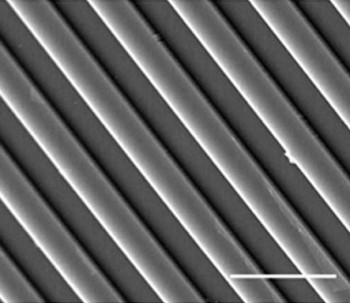 Scanning electron microscopy image of the grooved surfaces on which the stems cells were grown.
Researchers at the School of Engineering and Materials Science have shown for the first time that the specialised role stem cells go on to perform is controlled by primary cilia, tiny hair-like structures protruding from a cell.

Stem cells are capable of becoming any cell type within the body through the process of differentiation. The discovery has the potential for application in the development of new therapies for a range of medical treatments where scientists aim to replace or regenerate tissues that have become diseased or dysfunctional.

Publishing in the journal Scientific Reports, the researchers found that growing adult stem cells on micro-grooved surfaces disrupts the biochemical pathway that determines the length of the primary cilia. This change in length of the structure ultimately controls the subsequent behaviour of the stem cells.

"Primary cilia are a thousand times smaller than the width of a human hair and are a ubiquitous feature of most cell types but were once thought to be irrelevant. However, our research shows that they play a key role in stem cell differentiation," explains co-author Professor Martin Knight from Queen Mary’s School of Engineering and Materials Science and the Institute of Bioengineering.

"We found it’s possible to control stem cell specialisation by manipulating primary cilia elongation, and that this occurs when stem cells are grown on these special grooved surfaces."

Stem cells are being considered to treat a number of degenerative conditions such as arthritis, Alzheimer's disease and Parkinson's disease.

This work was funded by the Wellcome Trust.