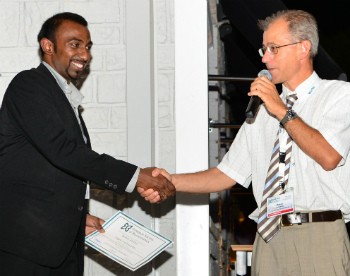 Angelo’s primary supervisor was Dr Himadri S. Gupta, SEMS, Queen Mary University of London, and his second supervisor was Prof Nick Terrill, Diamond Light Source, UK. Angelo’s thesis, entitled “Analysis of alterations in matrix quality at nanoscale in metabolic bone diseases using synchrotron x-ray diffraction”, developed in situ synchrotron X-ray techniques into a diagnostic tool to quantify the changes in bone tissue at the atomic and molecular level during ageing and disease. This research can be applied to understanding the mechanisms of bone fragility in metabolic bone diseases and joint degeneration conditions like osteoporosis and osteoarthritis, and also in quantifying the effectiveness of drug treatments in improving the resistance of bones to fracture. Angelo’s research has so far led to three published papers, with two more currently in review, in leading journals such as Bone and Journal of Bone and Mineral Research.

Angelo graduated with a first class MEng degree in Medical Engineering from QMUL in 2009. He then joined the group of Dr Gupta and completed his PhD in a three year period. He is currently a Post-Doctoral Research Associate in the group of Prof. Anthony Bull at the Royal British Legion Centre for Blast Injury Studies, Department of Bioengineering, Imperial College London.