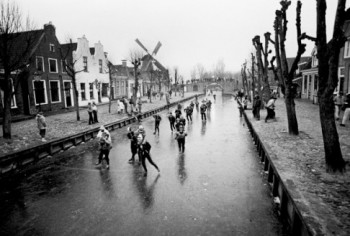 Professor Ton Peijs has proposed that, when areas of ice are not thick enough to meet the requirements of a speed-skating competition in the Netherlands, the organisers could lay out newspaper then pour water on top and allow it to freeze. Ice must be 15cm thick across the whole course to hold the hours-long race. This year, 10 per cent of the course failed to reach this depth but with paper reinforcements, a 5cm thick layer of ice would be toughened enough to hold the race. It could then take place much more regularly- it is currently held around once per decade when the weather is cold enough and causes great excitement across the country. Professor Peijs's comments have been received with interest and he has since appeared on national Dutch TV.