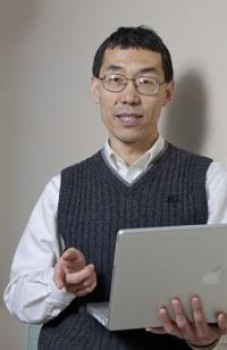 We use computer simulations to investigate the progressive loss of deformability of red blood cells (RBCs) due to malaria infection. The current understanding ascribes the RBC rigidification to a 10-fold increase in membrane stiffness caused by extra cross-linking in the spectrin network.
Local measurements by micropipette aspiration, however, have reported only an increase of about 3-fold in the membrane modulus. We surmise that the discrepancy stems from the rigid parasite particles inside infected cells, and have simulated two types of experiments that have been used to probe the RBC's deformability:
stretching by optical tweezers and transit through microfluidic channels.
Results show that with parasite growth and division through the ring, trophozoite and schizont stages of malaria, the parasite exerts an increasing mechanical effect on restricting RBC deformation.
With the solid inclusion, we can rationalize the apparently anomalous data from stretching experiments, and predict the amount of cell stretching quantitatively using the local membrane elasticity measured by micropipettes. In microfluidic channels, we show how the transit time increases with RBC rigidification, and predict eventual blockage that has been recorded in prior experiments.

James J. Feng received his B.S. (1985) and M.S. (1988) degrees from Peking University in Beijing, and his Ph.D. (1995) from the University of Minnesota, all in Fluid Mechanics. After a postdoctoral stint at the University of California, Santa Barbara, he was appointed an associate professor at the Levich Institute for Physicochemical Hydrodynamics in New York City, where he carried out research in non-Newtonian fluid dynamics and polymer rheology and taught in the Mechanical Engineering department of the City College of New York. In 2000, he received the NSF Career Award for work on multicomponent polymer flows. In 2004, he moved to the University of British Columbia in Vancouver, Canada, as a Canada Research Chair in Complex Fluids and Interfaces, with a joint appointment in Chemical and Biological Engineering and Mathematics. He received the CFI (Canada Foundation for
Innovation) Leaders Opportunity Award in 2008, and the NSERC (Natural Sci. & Eng. Res. Council) Discovery Accelerator Award in 2009. He was also a UBC Killam Faculty Research Fellow during 2010-2011. His current research covers multiphase and interfacial fluid dynamics, cell and tissue mechanics and morphogenesis.