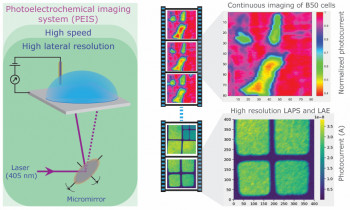 A novel photoelectrochemical imaging setup that combines, for the first time, fast imaging (demonstrated with speeds of up to 8 frames per second) with micron resolution is introduced. A hematite substrate was developed for continuous photoelectrochemical imaging of living cells. The substrate was shown to be suitable for cell culture and have excellent biocompatibility. The new setup in conjunction with the hematite sensor substrate enabled us, for the first time, to electrochemically image the basal side of living cells in culture in real time with excellent resolution and thereby monitor cell responses to a surfactant.
In contrast to previous work, we were able to continuously image multiple cells quickly and simultaneously, which will lend itself for the investigation of statistically significant cell responses to different stimuli in the future. Parallel photocurrent imaging and fluorescent experiments showed that photocurrents respond very sensitively to the permeabilization of the cell membrane. Photocurrent responses recorded during cell recovery after exposure to surfactant demonstrated the potential of the technique to gain insights into cell-surface interactions that cannot be readily accessed by other techniques.

We expect that this measurement technology will be of widespread interest in different branches of cell biology and aid the study of the communication between cells, their adherence to surfaces, their development and division and their response to drugs and other stimuli at a microscopic level.