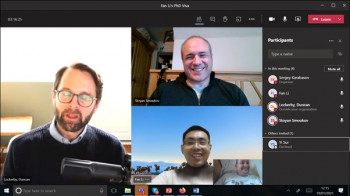 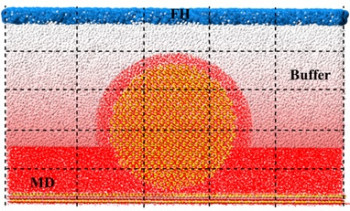 A statistically converged solution is obtained for the problem of the Atomic Force Microscope (AFM) cantilever moving at a slow speed in water compressed between the AFM tip and the substrate in a few days via the multiscale method, whereas non-equilibrium MD methods on the same computer would require years.

Many congratulations to Fan Li for successfully passing his PhD Viva with minor corrections on the dissertation “Non-equilibrium and hybrid multiscale modelling of molecular systems”. The Viva was held remotely by Teams.

Many problems in science and engineering comprise multiple scales in space and time. A particular example is micro and nano-fluidic devices, which are extensively used in modern material and soft matter sciences. While single-scale methods such as Direct Simulation Monte Carlo and all-atom Molecular Dynamics (MD) can provide a high-fidelity solution, their application is limited to microscopically small simulation domains and short simulation times. The latter is an especially serious limitation in non-uniform flow problems with relatively slow flow speeds in comparison with the thermal fluctuation velocity. Multiscale methods, which are based on model/ domain decomposition approaches, combine the all-atom resolution with continuum flow modelling and can provide an order of magnitude faster solution, in some applications, comparatively to pure MD.

In his work, Fan Li further developed the hybrid multiscale method in order to accelerate the atomistic scale resolving simulations by orders of magnitude. In the method, the MD equations and the Computational Fluid dynamics (CFD) equations are concurrently coupled via the system of conservation laws inspired by analogy with two-phase flow dynamics. One phase is purely atomistic and the other is driven by the continuum representation of the same liquid, and the coupling of such phases preserves both the macroscopic flow and thermal fluctuations. Depending on the application, the method can be used either in the fully coupled (the MD and CFD provide feedback one for another) or in the simplified one-way coupled formulation (the information between MD and CFD propagates one way only). In the dissertation, Fan Li considered hydrodynamic transport properties, such as viscosity, by first conducting non-equilibrium MD simulations of nanoscale flows. He then showed how the hydrodynamic transport properties can be used to inform the development of fast multiscale models of liquid-solid interaction problems as well as simulate diffusion of multiple bio-molecules in non-uniform water flows. The project was supported by the China Scholarship Council.